Today is a big catchup day in the studio. I have a couple of neat shoots that I have covered recently that I have not yet posted about on the blog. There are more shoots scheduled for this month, some dance related, some events, and some portraits. I am really excited about trying to make more photos for clients. Hopefully more blog readers and other visitors will ask me to help them with their photo projects. I am ready to take on the challenge!

Speaking of challenges, every photo shoot has them. Before every shoot that I do, I am anxious about how I am approaching the task at hand. I no longer worry about whether or not I have the equipment. My gear is no longer a limiting factor. With all the different events and conditions I have covered in my career, I know that I have everything I need to make good photos. The only question is if I have mastered when to use each piece, and how to use specific gear.

Emphatically, there is no bigger regret as a photographer to have a piece of gear with you that you never took out of the bag. Esepcially if realize later it could have made your shoot better. This has happened to me on a few occasions, and it affects the way I view the images later. The fact that I could have done more but did not, really bothers me. It pushes me to learn the lesson and not repeat the mistake. This is one of the reasons that I think my job as a photographer is still exciting for me. I am far from mastering the craft, but I am encouraged by my progress. Each time I shoot, I have an opportunity to make new photos. Hopefully there are people reading this blog, or following my social media channels can see how things have changed for the better! Hopefully you get to catchup on your to-do list soon! 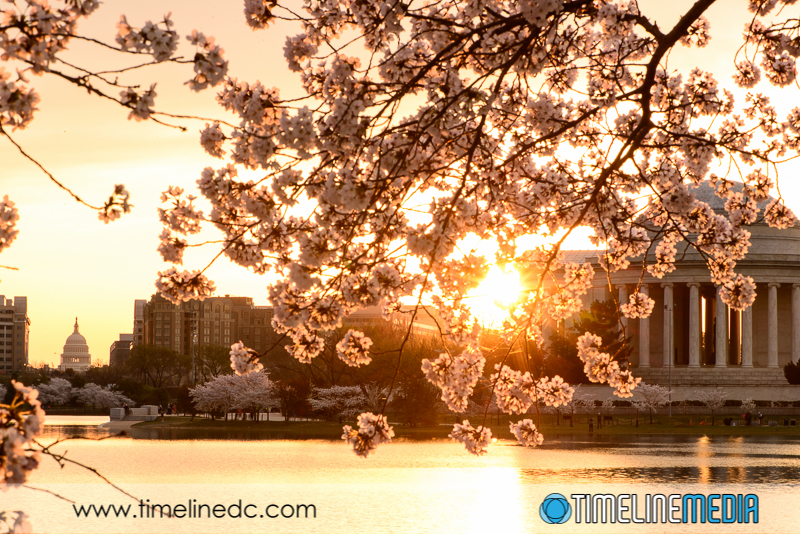 The time for the cherry blossoms decorating our streets has now passed. I had a note to go back and post more from this time since I made a lot of images by the Tidal Basin in downtown DC. It was the latest that the blossoms reached their peak with the extended winter that we had in this area. Luckily, we were treated to a great display that was perfect for photographers from sunrise to sunset.

These images were from sunrise by the Jefferson Memorial. There were many other photographers right around me, but everyone was very careful to stay out of everyone’s shots. I staked out a place high on the hill in between some cherry trees to attempt the often-done Memorials through blossoms. This is the first time I had attempted it so early in the morning. I will be making an effort to do this every year from now on!

The golden light just before sunrise was especially strong in this area. With the height restrictions on buildings in Washington, DC, it allows for sunlight to reach the monuments and memorials without being obstructed. This particular morning, the clouds were kind to stay away for a little while after the sun broke through the horizon so everyone that was there this morning had perfect light. The strong orange sky was complimentary to the pink blooms making for a different color combination.

Later in the day, the blooms are against a bright blue sky background. Most cherry blossoms images have this combination – classic and very good on film!

Now different flowers are starting to bloom in the area. Azaleas, dogwoods, and soon the roses will start to bud. I’ll be sure to have my camera lenses cleaned and ready for them! 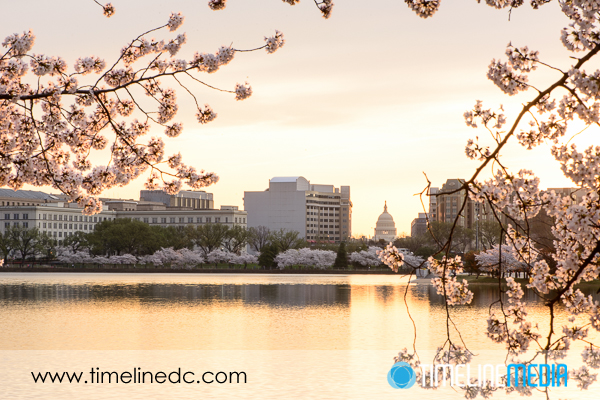 It just happened, but I am already missing the cherry blossoms this year. The photos from this year’s blooms were really satisfying. The weather, and the amount of time that I had to take advantage of their peak really came together nicely. Morning, afternoon, and evening, were all available to me this time. Moreover, I did not have to rush around as in other years. There were so many photographers around the Tidal Basin this year, with all kinds of gear! There were so many that were trying different angles, and strategies to get the perfect photo. I joined them with my own attempts. Of course, not everything will work when you first try, and this was probably my biggest disappointment.

From this spot, most images are of the blossoms in the foreground with either the Washington Monument in the background towards the left, or the Jefferson Memorial towards the right. In between these two familiar sites is a clear view of the Capitol Building that is much further away. Because of the distance, it is much smaller than the other two memorials in the frame. Consequently it is not as popular a subject from here.

But I wanted to try going for it since it seemed really easy to see this morning. I used the longest lens I had in the bag, a 105mm focal length. This was giving me what I wanted as anything much longer would have made the building larger, but the blossoms would have been harder to distinguish. In the first frame above without any added light, the blossoms were really in shadow, and look like really ugly clouds or debris in front of the lens.

My next thought was that I should add some light from a speedlight to illuminate the blossoms, and show off more of their color. I held the flash off of the camera with a sync cord so that the light would not be positioned directly in front of the blooms. Here is the result:

It was as expected, but not that great to my eye. I tried a few more frames changing the flash power, the angle of the flash, but it did not change much. Perhaps I could have tried “painting” on the light with a small flashlight or had a softer modifier for the speedlights, but I did not have any more time as the sun started to rise quickly out of the horizon really changing the look of the overall scene. Turns out – THAT was what I needed to make a better frame.