In conjunction with other photography studios, I contributed to the Redfin blog. Given that they are a leading real estate website, dynamic images of homes and lifestyle are important to their clientele. Although they target people searching for a new home, they also provide resources on their blog for new homeowners now enjoying and setting up their new living space.

Curate a Gallery for Home

With this in mind, they reached out to photographers to give them some content about presenting photos in your home. Hanging photos is not a novel idea, however, there are many new options that update this decorating tradition. Regardless of your camera, these are available to you directly from print labs. Of course, I hope you would contact me to provide awesome images for your walls, but these options can be made from your smartphone! To see the article, here is the link on their website:

How to Curate a Gallery Wall in Your Home – Redfin

In reviewing the other contributions, there are some great suggestions for displaying photos! Because of our eyes being so calibrated to tiny screens from our phones, tablets, and computer monitors, these large prints make an impact! If you do not feel inspired by any of the images in your library currently, contact me and I would be happy to give you some ideas!

EVgo opened its 800th location for charging cars in its growing network. Electric cars are certainly more prevalent on our roadways. While their adoption is faster, it is the infrastructure to support them has also grown as quickly. It is a ‘chicken or the egg’ question where both needed to be built to sustain the other. With this in mind, these electric chargers have been opening in many fueling stations, and shopping centers in our area.

At this time, EVgo wanted me to make some images of their location at the Sheetz in Chantilly. Appropriately, this is in the middle of a high technology section of the Dulles Corridor. To be sure, this station was where many commuters going to work in data centers and other technology companies in the area stop with their electric vehicles. Luckily, they had some electric cars available to be placed by the chargers.

While we were waiting for all the cars to arrive, I was able to see some behind-the-scenes of EVgo charging stations. A technician was putting the finishing touches prior to their opening. He described how he is traveling the country installing these stations, and he was definitely familiar with how to get these online.

Prior to leaving the station, I also made some images with people using the chargers. It was here that I tried to stretch more lighting to bring out their faces and make the action a little clearer. In due time, this will be a familiar scene as electric cars become more the norm, and gasoline is the anomaly! 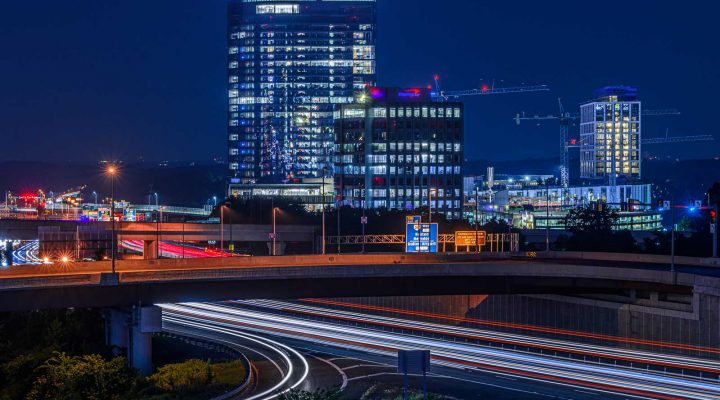 Today is my 44th birthday! Concurrently, it is Patriot Day in the United States which is the reason for patriotic colors in the photos. Certainly, half of the year has been a challenge. The pandemic lockdown drastically changed everyday life and work in 2020. However, I have used my photography to keep myself busy.

At first, I only had one assignment to capture this large American flag on the Tysons Tower. Since it was scheduled to only be up temporarily, I went out during different times during the day to see how it looked with different skies. With less foot and car traffic, it was a good way to social distance!

Additionally, I did not have as many other projects to work on. With this in mind, I could take more time to experiment. I went deep into the equipment bag to try gear I normally do not bring with me to expand my skills. As can be seen, I expanded my self-assignment to include other patriotic colors on other buildings. They make for a nice collection!